Disclaimer: The material included in this web site is not intended as legal advice.  Viewers of the site should not act upon information contained herein without the advice of legal counsel.  This is an advertisement and should not be construed as establishing an attorney-client relationship.  Information sent via the Internet is not necessarily private.  Do not send confidential information to Jamison Chappel & Beaumont without approval of this firm. 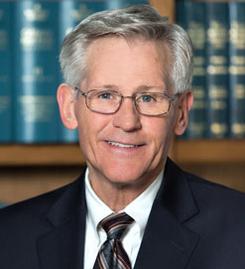 Gregory M. Chappel became a member of the State Bar of California in 1984.  He is highly experienced in the areas of business, commercial and real property transactions and litigation; real estate development, zoning and planning matters; formation of corporations, LLC's and other types of business entities.  Additionally, he provides counsel and assistance in labor relations, trademark and copyright registration and protection, and probate and estate planning.  Mr. Chappel also performs all aspects of franchise development, registration and counseling, has assisted in the development and registration of several franchise operations and has acted as the chief legal counsel for Pizza Factory, Inc. since 1985.  Mr. Chappel is an experienced appellate attorney who has handled nearly four hundred civil and criminal appeals during his career.

Mr. Chappel graduated from the University of California at Berkeley and began a  career in business with an international corporation.  Subsequently he attended and received his law degree from the University of the Pacific, McGeorge School of Law.  Upon graduation, Mr. Chappel became an associate with a real estate, business and banking firm in Fresno before beginning his own practice.  In 1985, he joined together in Oakhurst with his late partner, John O. Jamison, and subsequently formed the firm of Jamison & Chappel in 1992.

Mr. Chappel has long been active in Oakhurst and surrounding communities.  The firm has been a member of the Oakhurst Area Chamber of Commerce since 1992 and Mr. Chappel served on the Chamber’s Board of Directors for ten years and as its President in 1999 and 2013.  He is a member of the Oakhurst Sierra Rotary Club, served on its Board of Directors for six years and as its President in 2004-2005.  He was a founding member of the Action Committee to Incorporate Oakhurst Now and served as its Vice President from 2001-2009.  Mr. Chappel was appointed by the Madera County Board of Supervisors to act as the Chairman of the Maintenance District 22A Advisory Committee from 2001-2004 which successfully led the campaign to pass a ten million dollar bond measure for improvement of the waste water treatment facility in Oakhurst; he continues to serve as an appointed board member of that Committee.  Mr. Chappel was honored for these achievements in 2003 when he was named Man of the Year by the Oakhurst Area Chamber of Commerce.

Mr. Chappel is well experienced in all aspects of civil litigation and has successfully tried countless cases before both judges and juries.  His ability to analyze and determine the merits of a case is exceptional and substantiated by the fact that he has won all cases he has tried before a jury and nearly all tried before a court.  In this fashion, he has been able to counsel his clients to a successful conclusion of a case, whether by trial or settlement.  In transactional matters, Mr. Chappel is highly skilled and able to anticipate potential problems, thereby ensuring that his clients are well protected in their commercial and personal activities.